Attention to beauty, and the development of cosmetics is not a new phenomenon for Korea. In fact, Korean women have used cosmetics, in various forms, since centuries. In Asia, professional entertainers called Geishas in Japan, or Gisaeng in Korea, where renowned for their flawless skin and delicate beauty far beyond East Asia. Many of their beauty secrets are still cherished today, such as the use of Rice, Camellia oil and Ginseng in cosmetics.

The first key to understanding the Korean skincare industry is to understand the legacy behind it. Koreans have among the longest documented historical civilized legacies (dating back to 8000 BCE) in the world.

The peninsular geography with ample precipitation provided for a relatively stable socio-political environment and allowed artistic endeavors to flourish. Skincare interest has been documented since the earliest Korean writings (700 BCE), and the Dongui Bogam*, an ancient Korean medicinal text, has an entire section (the Tangaekpyeon) on preparation and use of herbal ingredients, including for skin concerns.

The history of Korea’s cosmetic culture runs back to the Three Kingdoms period, from the women depicted in the murals of tombs shown with rouged cheeks and lips as well as delicately shaped eyebrows. It has been recorded that ladies from Goryeo (918-1392) favoured light make-up, using powder but without rouge or blusher, and eyebrows in the shape of a “willow leaf”. Although the Joseon Dynasty (1392-1910) was dominated by Confucianism and so restrained the practice of sumptuous makeup, it did however present the opportunity to decorate oneself with hair and apparel accessories.

Such changes in tastes and fashion also extended to the cosmetics containers and makeup tools as traditional cosmetics were made from natural materials. You can find them in many museums out there.

Korea’s cosmetic culture refers not only to makeup but also decorating oneself. As Korea’s makeup culture is also closely related to the hair styles and attire, such as hair and apparel accessories, Toilet Cases and Mirror Stands within their cultural context. Furthermore, the natural ingredients used to produce facial scrubs, beauty lotions, facial creams and oils, along with coloured powders, rouge and eyebrow ink…

Novel skincare ingredients and ingredient research and refinement are something for which Koreans have a great reputation. The state-of-the-art Korean skincare technologies (and there are several) really do lead the world. These include unique ways of processing (and fermenting) plant extracts, utilizing nanotechnologies such as nano-sulfur and nano-encapsulation of both EGF (Epidermal Growth Factor—a.k.a. human oligopeptide 1) and retinol, as well as unique ways of formulating with silicone-based emollients. A very different way of deploying emollients is actually a much sensed but little understood key component to the uniqueness and desirability of Korean products.

Before trying the more DIY beauty practice, consisting in rinsing the face with rice water, or green tea , let,s have a look to some of their ancient ingredients:

Ancient Secret:The Compendium of Materia Medica of the Ming Dynasty suggests applying pearl powder to moisturize skin—Chinese empresses even ingested the stuff. In the Dongui Bogam a recipe recommends mixing the powder with milk for a DIY dark-spot corrector.

Ancient Secret: A member of the mint family, this herb has been used topically in traditional Chinese medicine to treat acne, eczema, and psoriasis.

The Redux: Skullcap possesses anti-inflammatory and even possible anti-cancer benefits. The root contains the antioxidant baicalin, which inhibits melanin production and brightens the skin.

The Redux: Turns out, seaweed is a powerful hydrator that also repairs sun damage. “Studies have found that there are DNA-repair mechanisms in algae that protect from UV harm,”.

Ancient Secret: We know that the French love to eat their escargot, but “thousands of years ago, the Greeks used snail mucus for antiaging skin treatments,” Alexiades-Armenakas says.

The Redux: Stop gagging—snail slime is amino-acid-rich and antibacterial, and a recent German study showed that one type of the garden pest’s mucin contains anti-inflammatory salicylic acid. Snail mucin has since become a cult hit in Korea because of its major moisturizing and firming properties.

Ancient Secret: Greek goddess Persephone ate pomegranate seeds while trapped in the underworld, and the fruit has been curing colds and fight-ing the fevers of mortals ever since.

The Redux: “Pomegranate increases the potency of sunscreen and contains brightening vitamin C,”. “It’s also hydrating. Cell membranes get thinner as we get older, but antioxidants help cells attract as much water as possible.”

Korean beauty products follow the rules of Traditional Chinese Medicine — herbs, plants, and animal by products all figure very heavily into the healing, regenerating, and antioxidant-touting properties of Korean products. This is a good thing, and this also means that packages will boast ingredients from the benign and familiar-sounding brown sugar and rosemary to the strange and only-Asians-do-this-right?-sounding royal salmon eggs and advanced snail hydrogels. Remember: Food is medicine in TCM, and these ingredients are considered therapeutic and nutritious in cosmetics as well.

If the idea of putting snail mucous on your crows’ feet gives you the heebies, remember that Korean brands take pride in sourcing high quality, local goods, and products are heavily and closely regulated by the country’s food and drug administration.

So if you’re willing to pop an echinacea or slather coconut oil on your skin, give snail or green tea a try.

Koreans—especially women but men as well—view the care of skin as something to SAVOR and ENJOY.

Relax and give a try to the RICE or TEA WATER ceremony!

This tip for glowing and soft skin is used by many Asian women. It is not expensive and easy to apply. Next time when you cook some jasmine rice, it is recommended to keep the water and use it to wash your face. It will increase the softness and help your skin to nourish. Rice contains antioxidant properties like vitamin E. However, this vitamin will lose when you cook.

Women in Korea have a long history of making their own rice water to wash their face because of the long-established skin benefits. “It’s a natural moisturizer that helps slow aging, reduce dark circles, fade age spots, and brighten skin,” says Kim.

If you have rice in your kitchen, simply let it soak for about 10-15 minutes, swirl it around, and then use that milky water as a pseudo-toner. If you’d rather go with a ready-made rice product, stay tuned, I,ll launch a rice set to get the same brightening and moisturizing effects.

Another common ingredient in the Korean diet is a fermented rice wine called Makgeolli. Makgeolli is abundant in amino acids and minerals to help brighten your skin. Look for this ingredient in your face masks!

Research has established that topical application of green tea leaves or extracts have many benefits for skin, including anti-aging properties. The polyphenols in green tea possess potent antioxidant and skin-soothing properties, and show significant promise for improving the appearance of sun-damaged skin.

Epigallocatechin gallate (EGCG) is one of the active constituents of green tea believed to be responsible for its many health and appearance benefits, both orally and topically.

If you’re looking for green tea in your personal care products it may be listed by its Latin name, cameillia sinesis. It is a gentle antioxidant that is among the most well researched and impressive in terms of its many benefits; however, it’s not the best or the only antioxidants to look for, so stick with products that contain several antioxidants.

Green tea by the way, has rich sources of antioxidant benefits and is great for anti-aging. In fact, it is widely known that green tea provides some form of sun damage protection by blocking UV rays and this is why it is used in some sunscreen formulations.

Use green tea to clean out pores !

The Korean actress uses the beverage to wash her face, keeping her pores clean and her skin looking clear and blemish free.

Nothing messy or complicated and it’s just a three-step process:

1) Make green tea and chill it by keeping it in the fridge.

2) Before using the green tea, wash your face clean and steam or drape a hot face towel over your face to open up the pores.

3) Finally use the cold green tea to rinse your face again.

You can make the green tea with the green tea bags but if you’re using powdered green tea, then the directions is to put 2 cups of water for every 1 teaspoon of green tea powder.

Use as a facial toner and spritz

I drink a very normal brand of green tea and what I use to put  two bags into a bowl so that I can make sufficient tea to wash my face. I also decant some of the cold green tea water in a little bottle to use as a facial toner or to make a nice facial spritz too!

If you feel too lazy for that just order a GREEN TEA kit with some products based on green tea that I really love!! 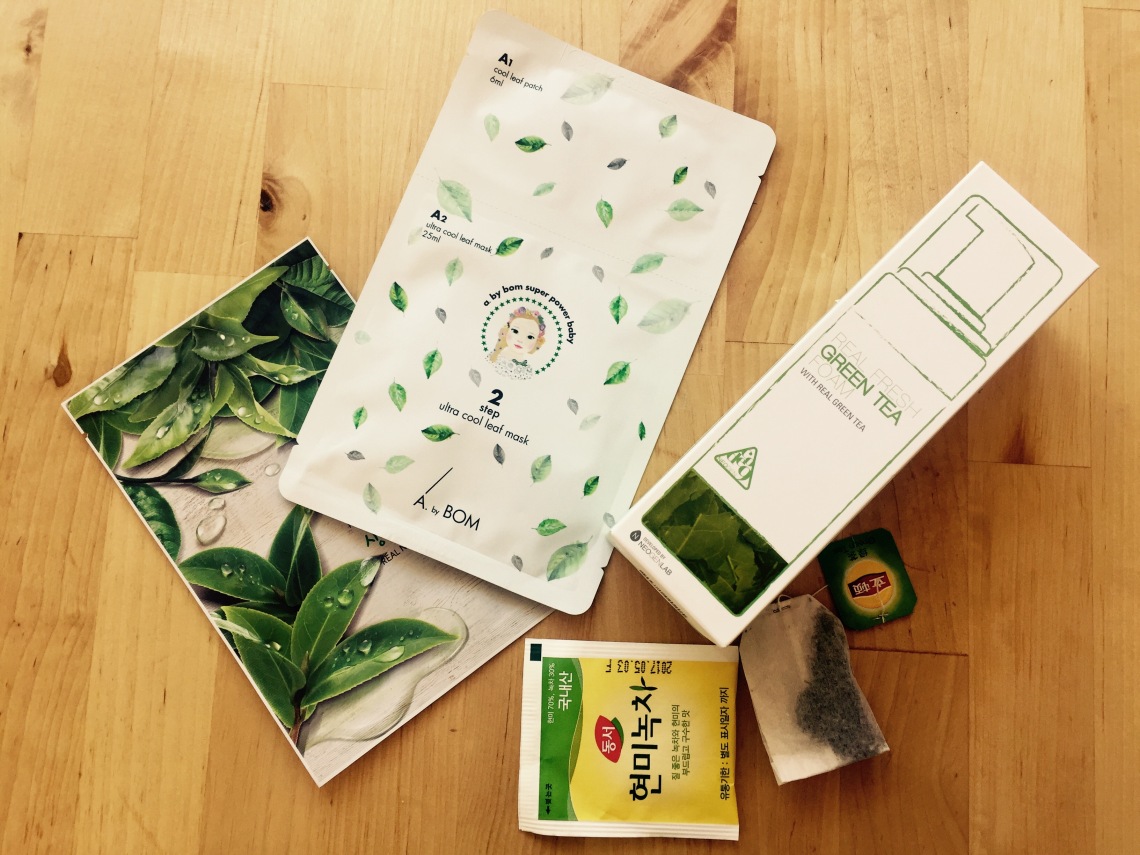 *The Dongui Bogam (동의보감) is a Korean book compiled by the royal physician, Heo Jun (1539 – 1615) and was first published in 1613 during the Joseon Dynasty of Korea. The title literally means “a priceless book about medicines of an Eastern Country”. The word “Eastern” is not the antonym to the Western World’s ‘Western’, but Heo Jun gave the book such name because Eastern Country was one of sobriquets of Korea. The book is regarded important in traditional Korean medicine and one of the classics of Oriental medicine today. As of July 2009, it is on UNESCO’s Memory of the World Programme.[1] The original edition of Dongui Bogam is currently preserved by the Korean National Library.